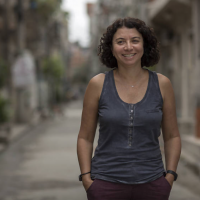 Eliana has a PHD in Social Service at PUC-Rio and is former Director at the University/Community Department at the Federal University of Rio de Janeiro and former Coordinator at the Post-Graduation course in Public Security and Social Services at the same university. She is also author of the book Testimonies of Maré.

Besides her academic career and long history of leadership within the Maré community, her own personal background connects her on a deeper level with the subject of her research. The daughter of Northeast Brazil migrants, Eliana grew up in the Maré favela in Rio de Janeiro, where she lived from the age of 7. She got married and raised two children there, and has developed community work in the area for over three decades.

From a very young age, Eliana was engaged in her community as a social and political activist, fighting for basic rights locally: she was president of the Maré Residents’ Association when she was only 22 years old and in 1996 she founded one of the main local NGOs, Redes da Maré (Maré Networks) – a national reference point in the sector.