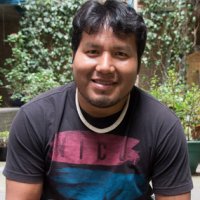 Internationally recognised filmmaker Takumã is a member of the Kuikuro people, and grew up in the Ipatse village within the Alto Xingú Indigenous Territory in Mato Grosso state, central Brazil. Trained through Brazil’s well known NGO programme “Video in the Villages”/Video nas Aldeias, he has received international attention and acclaim for his films including The Day The Moon Menstruated, The Hyperwomen and Kariokas.

During March and April 2015, Takumã was our Artist in Residence supported by Brazil’s Ministry of Culture and FUNARTE in partnership with British Council TRANSFORM as part of Culture Brasil Connection. This residency enabled him to make his latest film – London as a Village / Londres como Aldeia – which was recently screened in the Ipatse de Kuikuro and Kalapalo villages in the Xingú territory as part of our research project, The Art of Cultural Exchange. Following Takumã’s Festival premieres, PPP hosted a short tour of screenings of the film with UK partners in Spring 2016 alongside talks with Takumã to schools and educational institutions. Please contact renata.peppl@qmul.ac.uk if you are interested in a screening.