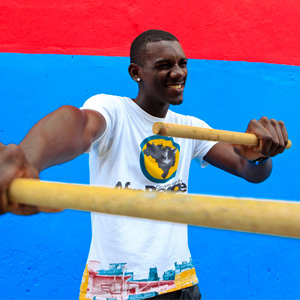 Based on the inspirational performances of Rio de Janeiro’s cultural warriors AfroReggae, Favela to the World seeks to strengthen the resistance and resilience of young people in the UK through engagement with art. Working in partnership with UK organisations in East London, Manchester, Newcastle and Liverpool, Favela to the World is building a unique legacy of performance, knowledge and skills with a diverse range of arts-based projects.

Now in its second phase, Favela To the World aims to build the capacity for social engagement through the arts with UK institutions and celebrate young people’s achievements through performance and debate.  With youth cultural leadership as its focal point, Favela to the World investigates effective means for creating and transferring knowledge so that young people have the means to affect change in communities at risk.

In 2006, Paul Heritage laid the foundations for Grupo AfroReggae’s work to be introduced to UK audiences, artists and professionals who work with young people at risk of gun and gang crime.  With the support of Arts Council England and a special commission from Barbican:bite to create a new show for London audiences, People’s Palace Projects brought AfroReggae to the UK to perform From the Favela to the World in London, Manchester and Oxford.  The success of this visit led to further invitations- in 2007 and 2008.

Since then, People’s Palace Projects have brokered the formation of the AfroReggae UK Partnership.  This collaboration has drawn together a range of UK arts and non-arts organizations who share a common aim- to learn from and be inspired by the work that AfroReggae are doing with young people in the UK.

People’s Palace Projects brought together seven young artists from Bad Taste Cru (UK Street Dance Champions) with seven percussionists and a choreographer from AfroReggae to share and compare socio-cultural methodologies. The collaborative laboratory research looked at their different but common histories. Both groups were brought up in communities deeply affected by violence. The percussionists from AfroReggae were born in Vigário Geral, a community dominated by the armed drug gangs in Rio de Janeiro; Bad Taste Cru is made up of young men from Omagh in Northern Ireland.

People’s Palace Projects worked with both groups to create Together Apart. The show premiered at the Juice Festival in Newcastle in November 2009. Before the performance, artists from both groups led workshops with young people at risk in local communities. After the show there was a debate in which the audience was invited to take part.

People’s Palace Projects re-worked Together Apart in May 2010, with rehearsals and presentations taking place in the favelas of Vigário Geral and Cantagalo in Rio de Janeiro, as well as within youth justice institutions male and female). Together Apart was presented at the Teatro João Caetano, one of the main state theatres in the Centre of Rio, and at the Centro Cultural Itaú in São Paulo as part of the Antídoto Festival on art in zones of conflict.

The aim of the short tour in Brazil was to reach young people who have most to gain and learn from the inspirational combination of artistry and cultural leadership that this collaboration offers. All performances involved the audience and finished with a discussion with the cast. This project has become a powerful celebration of the connections that young people can make to transform their worlds through art.

In July 2010 People’s Palace Projects co-produced a series of free workshops, seminars, screenings and performances with the South Bank Centre for Festival Brazil. These invited large numbers of the general public to engage with the ideas and diverse art forms that AfroReggae use in their cultural militancy, aimed at reducing violence and breaking down social frontiers in Brazil. The energy peaked with an explosive weekend of drumming and performance by AfroReggae, a taste of which can be seen in our short film here.

Favela to the World has a website of its own, where you can find out more about this project.