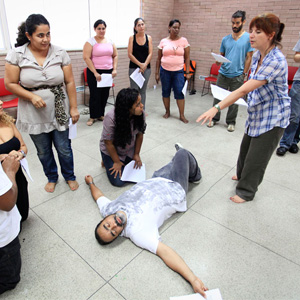 Members of the Royal Shakespeare Company (RSC), one of the most prestigious British theatre companies in the world, were in Rio de Janeiro from the 18th until the 25th of November 2011, to facilitate a series of workshops for actors and directors, from and associated with the cultural group Nós do Morro. The event was in celebration of the 25th anniversary of Nós do Morro, one of the most influential contemporary Brazilian cultural groups. Members from the RSC also facilitated workshops for students from Universidade das Quebradas (UFRJ) and UNIRIO, and teachers from public schools in Rio de Janeiro.

On the 23rd November a public masterclass was organised, which included a round table discussion on Shakespeare and theatre in Brazil at the Brazilian Academy of Language/ Academia Brasileira de Letras, Rio de Janeiro. Representatives included Royal Shakespeare Company, Nós do Morro, Cia. de Theatro Casa das Fases (Londrina) and Entelechy Arts (London). The event was open to the public and it was free to attend.

From 2012, Shakespeare Forum is part of the British Council Transform programme.