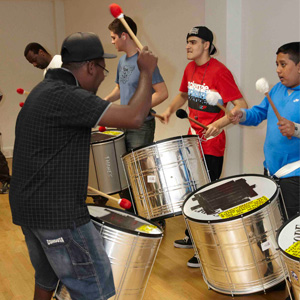 Between 2010 and 2013, People’s Palace Projects built a special relationship with St Paul’s Way School, one of only two Foundation Trust Schools in the country, situated less than a mile away from Queen Mary University of London’s Mile End Campus and with a board of trustees from the university.

People’s Palace Projects worked with St Paul’s Way on a new model for engagement through combined science and arts projects.  ‘Drumming for Change’ brought professional drumming practitioners from the Barbican Centre’s ‘World in Motion’ drumming project to work with students and staff across the school.  This programme culminated in the establishment of an after-school drumming group which rehearsed and performed under the guidance of drumming tutors.  ‘Drumming for Change’ provided a practical backdrop for People’s Palace Project’s ‘Waves Project’ – an investigation into the impact of drums in the school and exploration in ideas of wave energy.The project investigated subject areas such as microwave energy, electrical engineering and satellite technology, and finally came to the idea of sound waves themselves. As sound was made visible through the drumming, the hearing-impaired and deaf students at the school become involved with music making in a new and creative way, building further connections through the artistic process.

In 2012-13, PPP worked with St. Paul’s Way Trust School to establish an after-school drama group which was supported by Drama students at Queen Mary University of London and facilitated by our Associate Director, Sylvan Baker.  The project built the skills and confidence of school pupils in drama while also developing facilitation skills among the drama students.