What would it mean to confer museum status on existing Indigenous lands that play a key role in climate action? What does actually constitute a ‘museum’ in today’s society?

People’s Palace Projects senior project manager, Thiago Jesus and filmmaker Takumã Kuikuro will reflect on these questions through Natural Future Museums, a video installation that is on display at Glasgow Science Centre as part of the Reimagining Museum for Climate Action exhibition. The show is open from 25th June and will remain in place until November, when it will become part of the official “green zone” for COP26, the United Nations’ Climate Change Conference. See the teaser below:

Natural Future Museums (Thiago Jesus & Takumã Kuikuro, 2021 UK/Brazil) is a 13min film that draws from Takumã’s intimate archive of over 10 years of filmmaking in the Xingu Territory, and is a call for museums and cultural institutions to radically rethink their engagement with indigenous communities in the Amazon as a critical part of the fight to protect our future from the climate crisis. The film also depicts an animation of O Sopro do Maliri, by indigenous artist Denilson Baniwa.

The Amazon, Earth’s largest remaining forest, is near tipping point because of cattle ranching, soya plantations, illegal logging, mining, and criminal fires. The current Brazilian government has actively accelerated unprecedented environmental damage and persecution of indigenous peoples. Research shows that where indigenous people have full property rights to their lands, the forest is preserved. They are the world’s first and only real conservationists because they view both themselves and nature as one ecological family. Natural Future Museums is a provocation to the cultural sector: do we need to create new museums for climate action? Or can we inspire the sector to recognise these communities’ essential contribution to the integrity of the places they inhabit – and the planet – and become the best allies in their fight for survival? – asks Thiago Jesus.

Natural Future Museums also creates an intervention on the ICOM proposed new museum definition, a 99-word alternative statement formulated at its 139th session in Paris 2019. You can download a poster here. 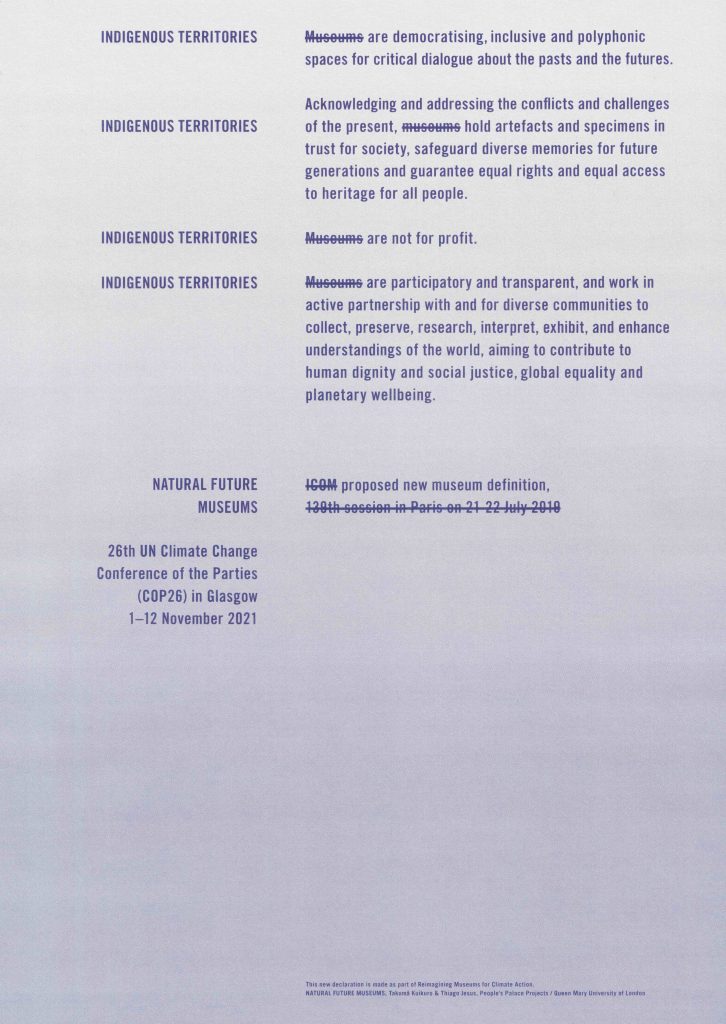 Museums and galleries have historically been heavily implicated in colonising Indigenous cultures and destroying the vital links between people, cultures and land. PPP believes these same institutions have a crucial role to play in raising international awareness about Indigenous peoples as essential protagonists in the fight against climate change and in resisting the destruction of their traditional ways of living.

Thiago Jesus and Takumã Kuikuro are among the eight competition-winning teams of Reimagining Museum for Climate Action, an international competition which was funded by the UK Arts and Humanities Research Council (AHRC) Heritage Priority Area. Designers, architects, academics, artists, poets, philosophers, museum professionals and the public at large were challenged to radically (re)imagine and (re)design the museum as an institution, to help bring about more equitable and sustainable futures in the climate change era. Over 250 entries from 48 countries judged by an international panel of museum, architecture and design, climate change, heritage and sustainability experts. The exhibition will be accompanied by talks, workshops and other activities encouraging debate around the future role of museums and heritage in times of rapid environmental change.