With One Voice, Rio homeless choir, takes part in a global postcard project.

February 2021- Members of With One Voice, a choir of people who have experienced homelessness in Rio de Janeiro, were invited to take part in the global project Send a Smile. They gathered (socially-distanced and masked) at the Museum of Tomorrow to create postcards for an international exhibition in Coventry, UK. They were encouraged to write some words or draw a picture describing what make them smile, even in the middle of this pandemic.

Watch the video of the workshop

This is part of a global project that began in Coventry last summer, run by theatre company Underground Lights. They wanted to reach out to people who were facing isolation during Covid-19 and come up with an idea of sending blank postcards to those experiencing homelessness.

The project has expanded through Coventry with partners such as Coventry City of Culture 2021, Crisis, Belgrade Theatre, Arty Folks, Grapevine and Arts & Homelessness International.

After introducing the idea to a few homeless shelters in London, it become international with the involvement of Cocoroom in Osaka, Japan. Now people who are or have been homeless on every continent are decorating these cards and spreading their smiles: from Rio to Toronto, Cape Town to Mumbai. Tokyo to Sidney.

These ‘smiles’ will then be sent to the UK, translated and displayed with all the postcards around the world in an arts exhibition planned for October 2021 as part of Coventry City of Culture. 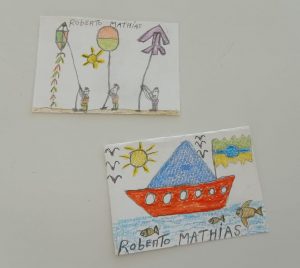 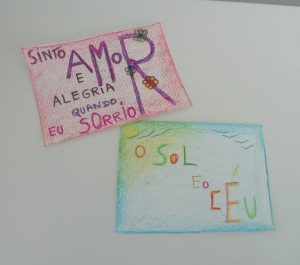 With One Voice is part of a global movement that made history in 2012 and again in 2016, when for the first time in history, a homeless choir was part of an official Olympic celebration, first in London and then in Rio de Janeiro. People’s Palace Projects and Streetwise Opera coordinated a three year arts & homeless exchange programme between the UK and Brazil, promoting meetings training sessions and performances. The project still ongoing aims to increase visibility and dignity for street homeless population.

To learn more about With One Voice, please click on projects page.